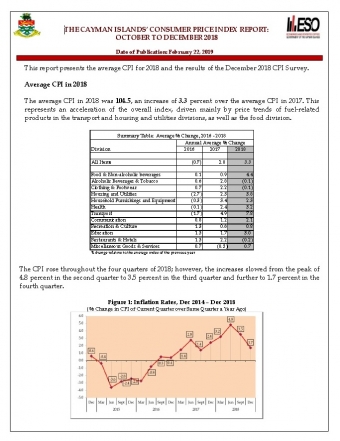 The Consumer Price Index in Cayman rose by 1.7% in the fourth quarter of 2018 compared to the same period in 2017. This represents a further slowing of the inflation rate from the peak of 4.8% in the second quarter and 3.5% in the third quarter. The average inflation rate for 2018 is 3.3%.

In the fourth quarter, the highest average price increases in the CPI basket were recorded in food & non-alcoholic beverages (4.6%), followed by housing and utilities (3.0%).  The rise in the latter division is due to the average cost of electricity which went up by 15.4%, and water supply  which increased by 5.0%; these were largely offset by generally stable housing rentals during the period.

More information from the Cayman Islands’ Consumer Price Index Report: December 2018 may be downloaded from www.eso.ky