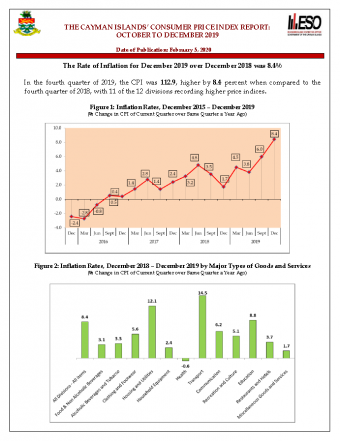 Consumer Prices Increased on Average by 5.7 percent in 2019

The average annual Consumer Price Index (CPI) rose by 5.7 percent in 2019 when compared to a year ago. There were increases in all quarters throughout 2019: 4.5 percent in the first quarter, followed by 3.8 percent, 6.0 percent, and 8.4 percent in the succeeding quarters.

The 5.7 percent overall average inflation rate in 2019 is traced to the price uptrends in all divisions. The highest average inflation rates were estimated for housing and utilities (9.5%), recreation and culture (7.0%), communication (6.4%), clothing and footwear (6.2%) and education (5.0%) — the price index for housing and utilities comprise the highest weight in the CPI basket. Food and non-alcoholic beverages had an average increase of 1.2 percent in 2019.

The Consumer Price Index (CPI) rose by 8.4 percent in the fourth quarter of 2019 compared to the same period in 2018. The transport division recorded the highest average price increase in the CPI basket (14.5%). This was due mainly to the rise in the average cost of passenger transport by air, which rose by 34.9 percent while the average cost for the purchase of motor vehicles increased by 16.7 percent.

The index for housing and utilities moved up by 12.1 percent in the fourth quarter of 2019. The main contributors to this increase were actual rentals paid by tenants up by 19.7 percent, imputed rentals for owner-occupiers up by 12.9 percent, and services for the maintenance and repair of the dwelling up by 6.6 percent.

More information from the Cayman Islands’ Consumer Price Index Report: October to December 2019 may be downloaded from www.eso.ky