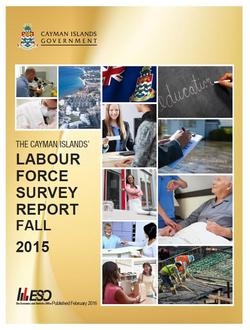 "The overall unemployment rate in the Cayman Islands declined to 4.2 percent in Fall 2015"

“The continued decline in the Caymanian unemployment rate from 9.4 percent in 2013 to 6.2 percent in 2015, is the outcome of deliberate economic policies and strategies bearing fruit. This was achieved through cooperation and hard work between the business community, the public sector and the wider society” said the Minister for Finance and Economic Development, Hon. Marco Archer. “While the steady decline is commendable, much more can be accomplished as a country if we continue to combine our efforts and rally behind sound public policies toward achieving full employment for Caymanians in the medium term” he further noted.

“I recognize that achieving full employment for Caymanians in the medium term may not be easy but it is also not impossible and requires additional training, a positive attitude and a willingness to offer employment opportunities.” Minister Archer also stated.

The final results of the Fall 2015 Labour Force Survey, released today by the Economics and Statistics Office, presents data on Cayman’s labour force, unemployment rate, and persons who are not economically active.