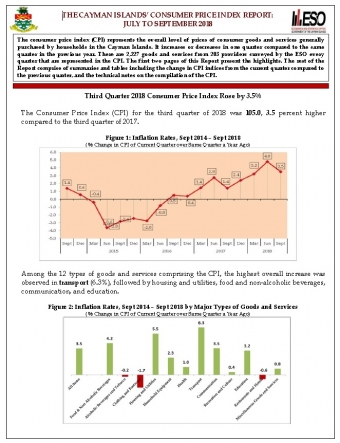 The largest contributor to the third quarter inflation rate was transport-related items which went up by 6.3% on average. The cost of fuels continued to rise, this time by 10.7%.

Airfares also rose by 8.0%, although this has significantly slowed compared to the increases of 21.5% in the first quarter and 52.3% in the second quarter.

Meanwhile, the average housing rentals was stable during the quarter relative to the same period in 2017.

More information from the Cayman Islands’ Consumer Price Index Report: September 2018 may be downloaded from www.eso.ky.