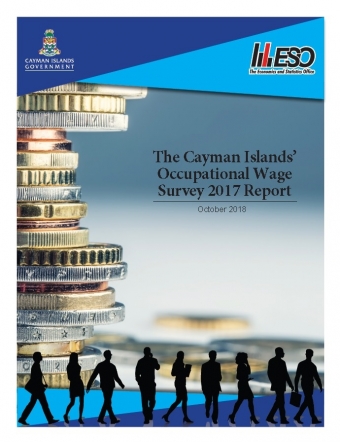 The Economics and Statistics Office released today the Occupational Wage Survey 2017 Report.  The Occupational Wage Survey (OWS) was conducted across all types of businesses from October 2017 to February 2018, and among a sample of households with employees from November 2017 to April 2018. There were 1,270 respondents to the OWS 2017 who supplied data on the 19,215 employees represented in the Report.

Describing the occupational wage survey as historic, Finance Minister, Hon. Roy McTaggart, says, “Designed to an internationally comparable standard, the report brings together, for the first time, information about the local labour market that will help inform Government policy and future legislation across a number of areas.”

“The Ministry of Finance is committed to working with employers, employees, human resources professionals and other stakeholders, across all sectors, to ensure that we all have access to the information that we need to make decisions that will ensure the Cayman Islands remains a competitive labour market, that attracts and retains the best talent from around the world”, Mr McTaggart adds.

Employees from the following industries had the highest average monthly total compensation: Professional, scientific and technical activities (mainly legal and accounting) earned $7,231 per month; and Financial and insurance activities earned $6,555 per month.

Employees from the following sectors had the lowest average monthly compensation: Activities of households as employers earned $1,058 per month; and Agriculture, forestry and fishing earned $1,736 per month.

The Report also shows the percentage of employers (excluding households as employers) who indicated providing various benefits and allowances, including the following: health insurance – 94.7%; pension - 92.2%; vacation leave – 92.8%; bonus – 57.8%; and training and education allowance - 47.3%.

More information on the Cayman Islands’ Occupational Wage Survey 2017 Report may be obtained from www.eso.ky.