Home / News / Importation in Second Quarter is Highest Since 2005 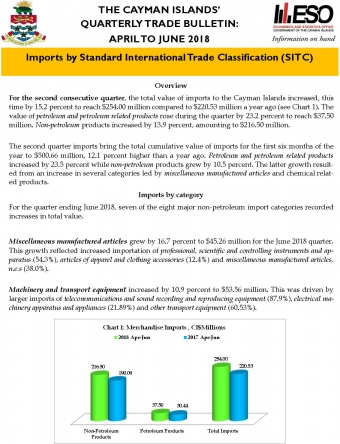 Importation in Second Quarter is Highest Since 2005

The total value of the Cayman Islands’ importation of merchandise goods stood at $254.00 million for the second quarter of 2018, an increase of $33.47 million or 15.2 percent over the comparative period in 2017. This growth rate is the highest second-quarter growth since 2005.

Importation of both non-petroleum and petroleum-related imports grew.

Non-petroleum imports amounted to $216.50 million, an increase of 13.9 percent over the June 2017 quarter. Several categories of merchandise goods exhibited higher importation notably consumer goods (food and non-food such as clothing) and capital goods. The latter included telecommunications and sound recording and reproducing equipment and electrical machinery apparatus. However, importation of passenger motor vehicles fell for the second consecutive quarter.

Petroleum and petroleum-related imports rose by 23.2 percent to reach $37.50 million. This growth largely reflected an increase in the average price of oil in the international market, particularly prices of motor, jet and aviation fuel.