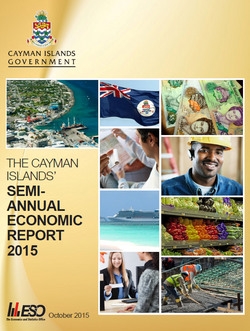 "The Cayman Islands’ economy grew by an estimated 1.6% in the first six months of 2015"

The Cayman Islands’ economy grew by an estimated 1.6% in the first six months of 2015, as the first quarter growth of 1.4% further strengthened to 1.7% in the second quarter.

However, the first six months performance is lower than the 2.2% growth for the same period a year ago, due mainly to a slow-down in the growth for hotels and restaurants arising from a moderation in the growth rate of stay-over and cruise arrivals during the period. The wholesale and retail trade and transportation, communication and storage sectors also indicated lower activity.

“While unplanned, the moderation in growth so far in 2015 is not totally unexpected,” the Minister for Finance and Economic Development, Hon. Mr Marco Archer stated. “This is consistent with the International Monetary Fund’s downscaling of global and US growth for 2015, which impacted key local sectors such as hotels and restaurants.”