Home / News / Economic Activity Accelerated in the First Half of 2014 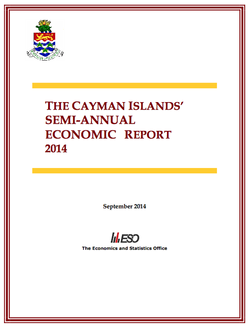 Economic Activity Accelerated in the First Half of 2014

"Overall economic activity in the Cayman Islands’ grew by an estimated 2.2% in the first six months of 2014."

Overall economic activity in the Cayman Islands’ grew by an estimated 2.2% in the first six months of 2014. ⫿This was a result of gross domestic product (GDP) growing by an estimated 3.3% in the second quarter, even higher than the first quarter growth of 1.5%. These trends indicate that the economy is now moving to a stronger growth path this year, coming from the slow growth in 2011 to 2013 when GDP growth averaged 1.2%,??? stated Hon. Marco Archer, Minister for Finance and Economic Development.

Robust growth was indicated for a number of sectors led by hotels and restaurants (8.6%) and wholesale and retail trade (6.4%), both of which were supported by sustained improvement in tourist arrivals. Financing and insurance, the largest sector, posted a modest growth (0.6%).

⫿In addition, I am pleased to note that despite higher GDP growth, the inflation rate moderated to 1.5% in the first half of 2014 compared to 2.0% in the same period in 2013. The economy seems to be in a state that macroeconomists call ⫿sweet spot??? where higher GDP growth is accompanied by a lower inflation rate,??? Minister Archer further explained.