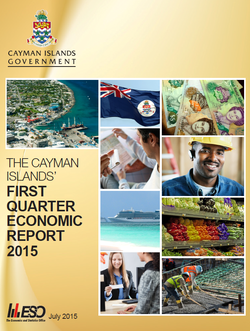 "The Cayman Islands economy is estimated to have grown by 1.4 percent in the first quarter."

The Cayman Islands economy is estimated to have grown by 1.4 percent in the first quarter.

“This is slightly lower than the 1.5 percent recorded a year ago, nonetheless this is a solid pace considering that the US had a GDP decline in the same period,” stated Hon. Marco Archer, Minister for Finance and Economic Development.  A number of sectors contributed to the growth led by hotels & restaurants and real estate and business. Financial services, which remain the largest sector, had a marginal growth of 0.4%, an improvement over the estimated decline of 0.2% in 2014.

“Overall, the recent performance means that we are on track in achieving the 2.1 percent forecast GDP growth for the year,” Minister Archer explained.

“I am also pleased to note that the fiscal performance continued to improve,” he added. The fiscal surplus at $151.9 million is 1.7 percent higher than a year earlier while the central government’s outstanding debt amounting to $530.2 million is 5.0 percent lower from the same period a year ago.