March 24,2020
In view of the latest situation concerning COVID-19 and to comply with the Government’s directive announced on March 24th: Our office will be closed from March 25th 2020 and will reopen April 6th 2020. During this closure, we will occasionally be accessing our emails which could result in delayed responses. Sorry for the inconvenience this closure may cause. Please continue to check this space for further updates.
More News 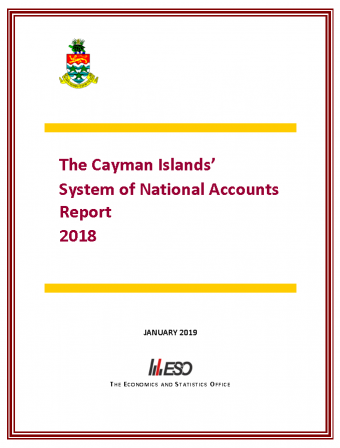 Domestic Economic Growth in 2018 is Highest Since 2007

The Cayman Islands’ System of National Accounts Report 2018 which presents the economic performance of the Islands using the Gross Domestic Product (GDP) is released today.

The GDP estimate for 2018 which is based on data collected from businesses and other establishments in the Islands shows that the local economy expanded by 4.1%, the highest recorded rate of growth since 2007 and the eighth consecutive year of positive economic performance. The 4.1% growth in real GDP (or GDP adjusted for inflation) exceeds the advance GDP growth estimate of 3.3% percent for the year which were based on early indicators.

For more information on the “The Cayman Islands’ System of National Accounts Report 2018”, please visit www.eso.ky.