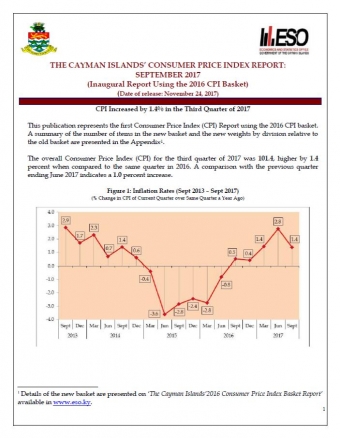 Consumer Prices Increased by 1.4 percent in the Third Quarter 2017

The overall Consumer Price Index (CPI) was higher by 1.4 percent in the third quarter of 2017 when compared to the same quarter in 2016. This estimate is based on the results of price surveys by the Economic and Statistics Office using the new CPI “basket” of goods and services. The basket consists of 2,227 consumer items from a total of 203 providers/outlets in Grand Cayman. The items were selected mainly because of their popularity, and stability or regularity in the local market since September 2016.

The inflation rate of 1.4 percent is attributable to the general price movement of several divisions led by transport which rose by 5.0 percent, health by 4.7 percent, and clothing and footwear by 3.6 percent.

The transport price index was impacted in particular by increases in airfares (10.8%), fuel prices (2.3%), and maintenance and repair costs (8.2%). Purchase costs of vehicles also rose on average by 2.4 percent.

The 4.7 percent inflation rate for health services is mainly due to a significant rise of 16.5 percent for pharmaceutical products and an 8.1 percent increase for other medicinal products. These increases were, however, partially offset by the 3.1 percent decline in therapeutic appliances and equipment.

The CPI Report for the third quarter represents the first publication using the 2016 CPI “basket.” The basket is based on the results of the 2015 Household Budget Survey (HBS) as updated between August 2016 and August 2017.