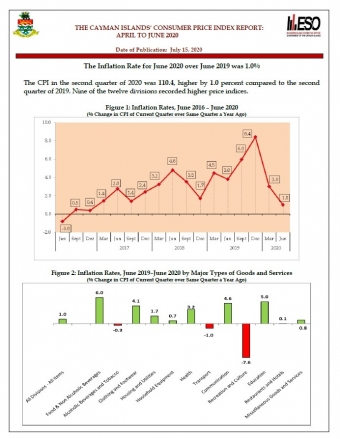 The Consumer Price Index (CPI) rose by 1.0 percent in the second quarter 2020 when compared to the same period in 2019. Of the twelve CPI divisions, nine recorded increases.

In the second quarter of 2020, the division food and non-alcoholic beverages recorded the highest average price increase in the CPI basket (6.0%). This was due mainly to the rise in the average cost of oils and fats, which rose by 20.4 percent while milk, cheese, and eggs increased by 12.9 percent. Tea, coffee, and cocoa also rose, but by 10.7 percent.

The electricity index declined by 4.4 percent, while water supply increased by 1.3 percent. The overall housing and utilities index increased by 1.7 percent, propelled by higher housing rentals.

The index for transport fell by 1.0 percent in the second quarter of 2020. The main contributors to this decrease were passenger transport by air down by 14.5 percent, fuels also fell by 8.6 percent.

While, when the second quarter of 2020 is compared to the first, the CPI fell by 0.9 percent, as the average cost of transport decreased by 5.0 percent, recreation and culture fell by 2.6 percent, and restaurants and hotels declined by 0.7 percent.

More information from the Cayman Islands’ Consumer Price Index Report: April to June 2020 may be downloaded from www.eso.ky