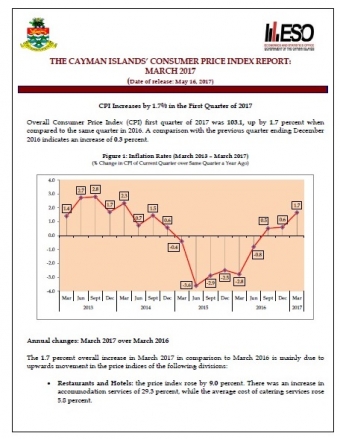 Consumer Price Index Increases by 1.7% in the First Quarter 2017

The CPI increased by 1.7 percent compared to the same quarter a year ago. The main contributors to this movement were the 9.0 percent rise in the index for restaurants and hotels, clothing and footwear that went up by 4.7 percent, and recreation and culture up by 2.9 percent.

For the first quarter, two divisions reflected a downward trend in prices, namely miscellaneous goods and services which declined by 2.8 percent and health down by 0.3 percent.

Compared to the fourth quarter of 2016, the inflation rate for the first quarter of 2017 rose by 0.3 percent as the indices for food and non-alcoholic beverages up by 0.9 percent, transport by 0.8 percent, and clothing and footwear 0.7 percent were the main contributors to the increase.

More information from the Cayman Islands’ Consumer Price Index Report: March 2017 may be downloaded from www.eso.ky.