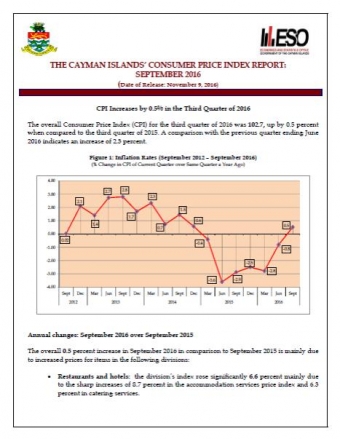 Consumer Price Index Increased by 0.5% in the Third Quarter of 2016

The average prices of goods and services consumed by households in the Cayman Islands, as estimated by the Consumer Price Index (CPI), increased in the third quarter of 2016 by 0.5% compared to the same period in 2015. This is the first time that the CPI increased after 6 consecutive quarters of decline due mainly to the impact of oil price reductions.

The largest contributor to the increase in the CPI was the 6.6% rise in the price index for restaurants and hotels. In particular, accommodation service fees had a significant increase of 8.7% in the third quarter over the same quarter in 2015. Average prices of restaurants also went up.

Other divisions that recorded increases in their price index were recreation and culture by 2.6% and education by 1.2 percent. The increase in the latter which is traced to pre-primary and primary school fees, occurred as the new school term started in September.

Higher housing rentals and fees for maintenance and minor repair of dwellings impacted the price index housing and utilities which rose by 0.5%.

Lower oil prices continued to moderate the CPI as shown by reductions in electricity charges and the operation of private transportation.