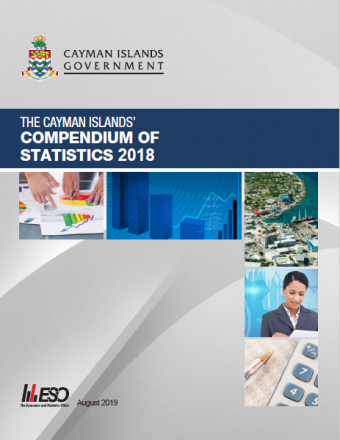 The Cayman Islands’ Compendium of Statistics 2018 released by the Economics and Statistics Office is a comprehensive collection of statistics from various public and private sector data sources covering population, demographics, social and living conditions; the economy, finance and development; the environment; and information and communication technology.

In social services, the total number of families who received assistance from the Needs Assessment Unit increased in FY2017/2018 to 2,059 compared to 2,049 in FY 2016/17, but still lower than 2,493 in FY 2013/14.  Families assisted with pre-school fees increased while assistance with rent, utilities, and burial expenses was lower during the period.

The number of persons receiving poor relief increased to 1,051, up by 5.2 percent. However, assistance with school lunches, school uniforms, indigent medical care, optical care, and clothing declined relative to the previous financial year.

Among selected economic indicators included in the Compendium, the volume of mail handled by the Post Office rose sharply by 62.1 percent in 2018 to 6.3 million from 3.9 million in 2017.  Incoming (foreign) mail recorded a significant increase of 66.3 percent in 2018 while out-going mail declined by 41.1 percent.

For more information on The Cayman Islands’ Compendium of Statistics 2018, visit www.eso.ky.