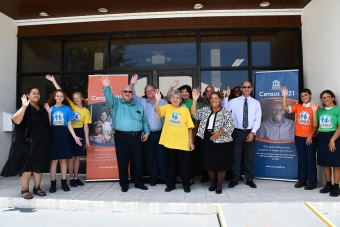 Census 2021 officially launched in Cayman Brac today, Friday, 21 May 2021, at a colourful celebration, marking the start of the national count’s education and publicity campaign.

The event took place on the grounds of the District Administration Building at Stake Bay. It unveiled a catchy jingle specially produced for Census 2021 that the students of Layman E. Scott Sr. High School performed with gusto.

After the ceremony, the ESO signed up potential census workers, who will participate in the different activities that will lead up to the actual Census 2021 count.

The actual count starts on 10 October and is scheduled to continue for two months when census enumerators will visit households in the Cayman Islands and conduct the count by asking a series of questions of and obtaining responses from the head of each household.

A preliminary census report featuring highlights such as total population is scheduled to be out in first quarter 2022 and the final report later that year.

The Economics and Statistics Office (ESO) that spearheads the census primarily aims to conduct a complete count of the population of the Cayman Islands.

School children and a large gathering of Brac residents participated in the Friday opening of the census that last took place in 2010. The usual gap of 10 years between censuses was stretched to 11 years due to the COVID-19 pandemic.

Welcoming the gathering, Financial Secretary and Chief Officer in the Ministry of Finance and Economic Development, Mr. Kenneth Jefferson, said: “The fact that we have various sectors speaking for Census 2021, this morning, underscores the broad mix of its likely users. Because of this, the ESO at the very beginning decided to adopt an inclusive approach in the preparation and implementation of the Census. This requires the representation and active involvement of as many Government Departments and non-government offices, as possible. In other words, it is critical for us to state the reality that the Census is a national event where everyone counts.”

He advised Brackers that the ESO expects to hire approximately 24 persons in the Sister Islands in connection with Census 2021 and that recruitment would begin in June.

“Census 2021 is the most extensive national statistical activity since 2010,” he said. To facilitate the management of census operations for the Sister Islands, the ESO would open a Census Office in Cayman Brac with the assistance of the District Commissioner's Office. “This will allow for easy access to the census staff should the public have questions about the census,” the Financial Secretary explained.

He urged everyone in the Cayman Islands to welcome the official enumerators and get counted. Only that way, would the exercise count as a successful national activity.

Offering the census message, Minister for Education, District Administration and Lands, Hon. Juliana O’Connor-Connolly, JP, MP highlighted that in addition to an accurate count of how many reside in the Cayman Islands, the census will also provide the vitally-needed central database for both public and private sectors alike.

This will also help meet the data needs of policy makers involved in national strategic planning, notably development planning. Additionally, it will provide the basis for better business planning by the private sector and inform all other planning and assessment initiatives, the Minister said.

She emphasised that it is ideal that planning in the government and private sector are based on the same information such as census data. Also, national history is best served by a census. Censuses provide historical snapshots of a country’s development between the periods when they were conducted, capturing the changes in the mix of nationality, economic profiles, challenges and needs.

In his remarks on the occasion, Member of Parliament Mr. Moses Kirkconnell, noted that an accurate count of all residents will help Government deliver better infrastructure. The better the tools, the better the outcomes and better the decisions, he said. For instance, as per the 2010 census, 99% of all households in the Cayman Islands have cell phones. Therefore, to reach people with quick messages, the cell phone would be a useful tool.

Two Cayman Brac residents spoke about the importance of the Census in planning for a better future for Cayman Brac.

Mrs. Mexi-Ann Grant highlighted “Cayman Brac Population and Community Life Over the Years” to provide a fascinating historical view of census, Cayman Brac and the life of the population over the years. For instance, in the late 1940s, the Brac population consisted mostly of Caymanians and a few people from other countries. As the island developed, to meet the demands for workers in every area of life, the population grew. Now there are people from all over the world. “As the population grew all areas of life in Cayman Brac changed,” emphasised.

Mrs. Fraulein Biamonte focused on “Census and Planning for the Future” noted that an update on the population and housing statistics is urgently needed. She also underscored that all census data collected will be confidential. The census data made available will exclude names of people and any information that can identify any specific person, she elaborated.

The provision of demographic data helps the Government decide how to allocate or distribute funding and assistance to departments in the Islands, she reiterated. This underpins building everything from schools to supermarkets, homes and hospitals, she added.

In closing, Master of Ceremonies and District Commissioner, Mr. Mark Tibbetts added his voice in emphasising the importance of censuses to all from government to the private sector. He thanked all involved in making the launch a success.