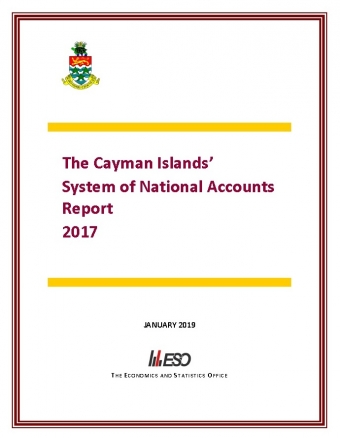 The Cayman Islands’ System of National Accounts Report 2017 which presents the economic performance or Gross Domestic Product (GDP) of the Islands is released today.

The Report presents the significant results of the project conducted by the ESO over a three-year period with the assistance of the Caribbean Technical Assistance Centre. The project aimed to align the GDP estimates of the Cayman Islands with the latest international methodology (SNA 2008) for estimating GDP. The project also sought to reflect the latest structure of the economy in estimating real GDP (or GDP adjusted for inflation) by using 2015 as the new base year, rather than the old base year (2007). The project made use of  detailed information from the annual Business Survey and the Household Budget Survey that were both conducted in 2015 and other various sources.

The various conceptual, methodological and data improvements reflected in the rebased Cayman Islands’ GDP series resulted in a 27.5 percent increase in the level of nominal GDP for 2015 (the new base year).  This resulted in an increase in the 2015 per capita GDP at purchaser’s prices to CI$66,438 as compared to CI$52,115 in the old series.

The financial & insurance services industry also continued on its upward growth trajectory in 2017, growing by 2.48%. This is the industry’s highest growth rate since it started its recovery in 2011.

For more information on the “The Cayman Islands’ System of National Accounts Report 2017”, please visit www.eso.ky.