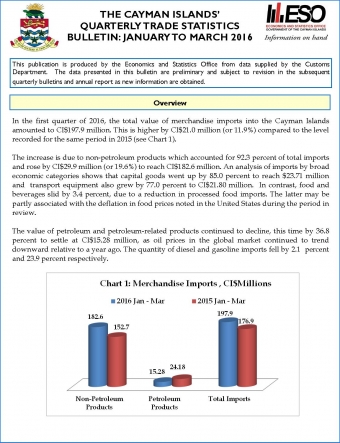 "The country’s merchandise imports in the quarter ending March 2016 amounted to CI$197.9 million,"

“I am pleased to note that imports in the first quarter increased, indicating a recovery from an overall decline in 2015,” stated the Hon. Marco Archer, Minister for Finance and Economic Development.

Total imports in 2015 declined by 6.3% due to a reduction in petroleum-related imports while non-petroleum imports grew at 2.0%.

The increase in the first quarter of 2016 is due to imports of non-petroleum products which rose by CI$29.9 million (or 19.6%) to reach CI$182.6 million. “Among these products, the highest growth rate of 85% was seen in capital goods, and this bodes well not only for economic growth this year but also in the coming years,” Minister Archer further stated.

Petroleum-related imports continued to decline in the first quarter, this time by 36.8% to settle at CI$15.28 million, due to a reduction in both the average prices and quantities of gasoline and diesel.