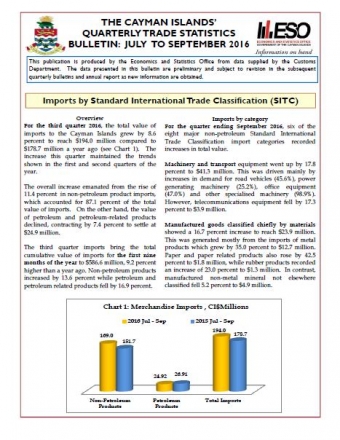 The total value of goods imported into the Cayman Islands grew by CI$15.3 million (or 8.6%) to reach $194.0 million in the quarter ending September 2016 in comparison to a year ago.  The importation during the quarter maintained the growth trend shown in the first and second quarters of the year.

The third quarter record stemmed from an 11.4% increase in the importation of non-petroleum products which amounted to CI$169.0 million compared to CI$151.7 million for the same period a year ago. Among these goods are transport equipment and parts and accessories which grew by 37.5%, amounting to CI$19.4 million. In particular, passenger motor vehicles increased by 52.1% to reach CI$37.6 million.

Additionally, food and beverages which account for 25.6 percent of the total value of imports, grew by 12.5 percent and stood at CI$49.6 percent compared to CI$44.1 million recorded for the same period in 2015.

In contrast, the total value of petroleum and petroleum related imports continued to decline in the third quarter to settle at $24.9 million on account of declining fuel prices in 2016 as compared to a year ago.  The quantity of diesel fuel and gasoline also dropped. However, the importation of aviation fuel increased in value and quantity.