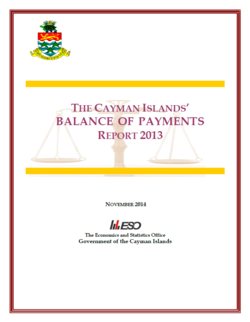 The country’s Balance of Payments (BOP) Report 2013 which summarizes the country’s economic and financial transactions with the rest of the world was released today. Data from the Report is used by credit rating agencies, creditors and foreign investors as general indicators of the country’s sources of foreign exchange for servicing foreign debt and investments.

⫿These results are not unexpected,??? stated the Minister for Finance and Economic Development, Hon. Marco Archer. ⫿As the local economy recovers, there is greater propensity for the rest of the world to lend to Cayman residents as shown in the Financial Account. This in turn leads to greater outflow of investment income as shown in the Current Account,??? he further explained.