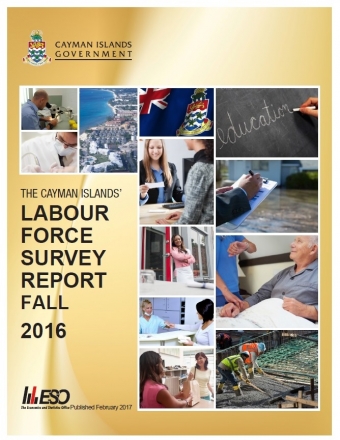 The Labour Force consists of the number of persons employed plus those persons that are available and looking, for employment.

The Caymanian Labour Force increased by 1.8 percent to reach 19,931, while Permanent Residents with rights to work  rose by 7.1 percent to 4,577. The Non-Caymanian Labour Force was estimated at 17,687, higher by 3.9 percent compared to October 2015. (Non-Caymanians are comprised of persons on work permits; those who are married to Caymanians but are awaiting Permanent Residence; and persons working by operation of law).

The increase in the Caymanian Labour Force resulted from a greater number of Caymanians who entered the Labour Force by making themselves available for work and, were looking for work in October 2016.

“A number of reasons could have motivated more Caymanians to enter the Labour Force in October 2016,” stated the Hon. Marco Archer, the Minister for Finance and Economic Development. “The sustained economic recovery, evidenced by a stronger-than-expected growth in gross domestic product (GDP) of 2.8 percent in 2015 and the estimated GDP growth of 3.0 percent as of the first half of 2016, could have encouraged job searches in the second half of 2016,” the Minister explained.

“In addition, the age of pension entitlement was increased to age 65 in May 2016, and this could have inspired persons 60 and older to re-enter the Labour Force.  A minimum wage was also established in March 2016, which could also have encouraged greater efforts towards getting a job by persons across all age groups,” he further noted.

The total number of unemployed Caymanians in October 2016 was estimated at 1,406 persons, or an increase of 197 persons from October 2015.

Among the unemployed Caymanians in October 2016, approximately 19.7 percent were previously employed in the construction sector. “Hence, when compared to the October 2015 Labour Force Survey results, the increase in unemployed Caymanians by 197 persons may be due to the completion of major construction projects” Minister Archer explained. “As new projects are foreseen to start in 2017, it is expected that these persons could be re-absorbed by new job opportunities,” he further stated.

The Cayman Islands’ Labour Force Survey for March 2017 is currently being conducted.