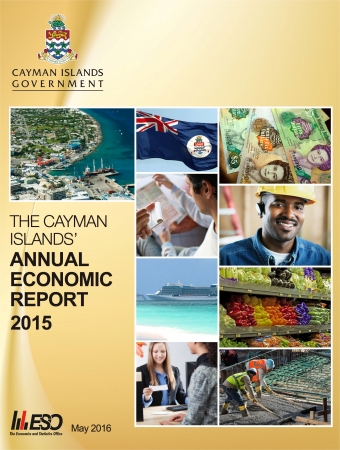 The country’s estimated Gross Domestic Product (GDP) at constant prices rose by 2.0 percent in 2015. This was the highlight of The Cayman Islands’ Annual Economic Report 2015 released by the Economics and Statistics Office.

“Despite challenges from the global economy, I am pleased that the combined performance of all our productive sectors achieved a growth rate that is higher than expected,” stated the Minister for Finance and Economic Development, Hon. Marco Archer.  As of the third quarter of 2015, indicators up to that period suggested that annual growth of gross domestic product (GDP) will be 1.7 percent.

The 2015 GDP growth, however, is lower than the 2.4% achieved in 2014. This performance coincided with the downtrend in global growth from 3.4% in 2014 to 3.1% in 2015, albeit US growth was stable at 2.4%. (The slowdown in global growth was due to the performances of China and other developing and emerging market countries).

The country’s GDP per capita in constant prices fell to $44,109 as the mid-year population growth outweighed the GDP growth.

Economic growth in 2015 was broad-based as all sectors expanded except the hotels and restaurants sector which declined slightly by 0.7% in 2015 as compared to a growth of 4.9% in 2014, mainly due to a slowdown in the growth of stay-over arrivals.

Meanwhile, the central government recorded in 2015 its third consecutive year of overall fiscal surplus which amounted to $116.1 million, higher compared to $93.2 million a year ago. This was achieved by a combination of higher revenue collection and lower overall spending.