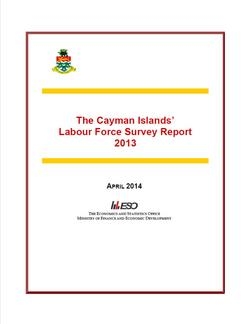 ⫿I am pleased that the labour market has improved for the Caymanians last year, and I expect it to make further progress this year towards reducing the overall unemployment rate,??? notes the Minister for Finance and Economic Development Minister, Hon. Marco Archer.

Minister of Employment, Hon. Tara Rivers said, ⫿The significant drop in the unemployment rate among Caymanians is a positive and encouraging sign. Since taking office in May 2013, the Ministry has invested a lot of time and energy into revamping and properly equipping the NWDA to be ⫘a valued partner and facilitator in the training, development and employment of Caymanians’. The fact that one in four unemployed Caymanians use the services of the NWDA is an indication that the agency is playing a vital role, but there is still work to be done to raise the profile of the agency in this regard.??? The Minister went on to say, ⫿However, with the significant physical, resourcing and structural changes that the NWDA has undergone since the last quarter of 2013, including the launch of the critically important NWDA/Immigration Database interface, the training and development and community outreach focus, and the positive track record of assisting Caymanians to find employment, I am confident that more and more Caymanians will continue to utilize the services offered at the NWDA, and work is continuing at the agency to better equip it to deliver on its mandate.???

The final results of the Labour Force Survey, released today by the Economics and Statistics Office, also present an analysis of Cayman’s labour force, unemployment rate, and persons who are not economically active.