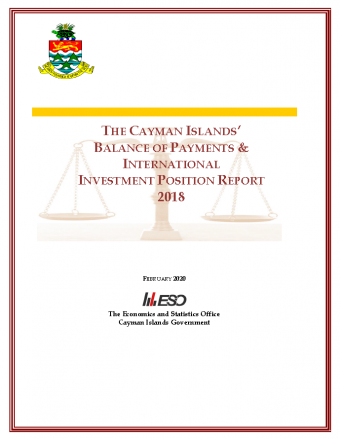 The Cayman Islands’ Balance of Payments (BOP) and International Investment Position (IIP) Report 2018 shows the statistical summaries of the economic and financial transactions between residents of the Cayman Islands and the rest of the world. The statistics are generated from survey returns of local businesses and other organizations, as well as data provided by the Cayman Islands Monetary Authority (CIMA).

The latest BOP statistics for 2018 shows that the total payments of residents to non-residents exceeded receipts, thus resulting in a current account deficit of $858.0 million, 18.1 percent higher compared to 2017.

The current account deficit in 2018 was primarily driven by the increased importation of goods, interest payments to non-residents for investments, higher workers remittances outflows. The large deficits from these transactions were partially offset by surplus flows from financial services, travel services, and other business services (largely from legal and accounting services).

The IIP shows the value and composition of foreign assets and liabilities of residents at the end of the year. The latter represents the total investments of non-residents in the Cayman Islands.

Other information may be obtained from the Report posted at the Economics and Statistics Office website: www.eso.ky