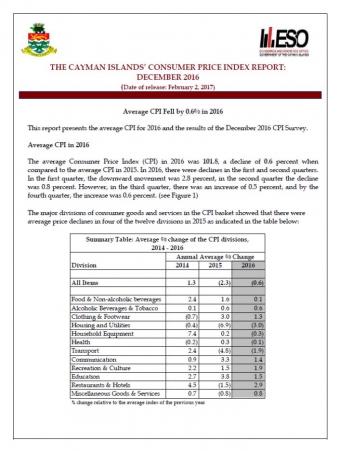 The average Consumer Price Index (CPI) declined by 0.6 percent in 2016.  The CPI for the first and second quarters declined by 2.8 and 0.8 percent, respectively, which outweighed the small growth in the last two quarters.

“The decrease in the average inflation rate for 2016 reflects the continued impact of falling fuel prices on the CPI, a welcome relief for the residents of the Cayman Islands” stated the Minister for Finance and Economic Development, Honourable Marco Archer.

The CPI increased by 0.6 percent compared to the same quarter a year ago. The main contributors to this movement were a 5.8 percent rise in the index for restaurants and hotels, recreation and culture that went up by 3.6 percent, and clothing and footwear up by 3.0 percent.

Compared to the third quarter of 2016, the inflation rate for the fourth quarter of 2016 rose by 0.2 percent as the indices for restaurants and hotels (4.7%), clothing and footwear (3.2%) and communication (2.3%) were the main contributors to the increase.